Early 1970's a camping trip into the bush near my home at Castle Hill became a ghostly trip into the past. Shortly after it fell dark I was treated to the sight of a sombre procession of soldiers and convicts from Australia's colonial past. They winked out of sight just feet from my hiding place 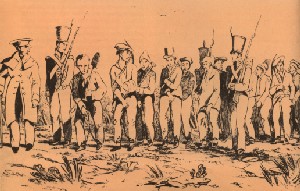 A drawing of a Hobart Chain Gang (1831). This scene is similar to the one experienced in the story.
Castle Hill Ghosts

The early colonies were brutal places. Not far from Castle Hill, the female factory at Parramatta was officially created to protect female convicts and give them work. But it produced real misery. Used as a brothel and marriage market by soldiers many of it's inmates never recovered

I made out the forms of a number of soldiers (three or five???) and at least two men in convict garb. They carried something like kerosene (paraffin) lanterns and the light did little to dispel the gloom. They all walked as though exhausted and their gear made noises. Maybe a lantern clanked on a slung rifle and the chains made a dull sound. Their feet made scuffling sounds and raised dust. As I write this I remember, the ground was grassy at the time, they should not have made that much dust!

The weapons of the men I took to be soldiers were slung and seemed longer than I was used to. They seemed exhausted. Their shoulders slumped and heads were bowed. They dragged their feet.

This wasn't written down for years and I still struggle with a vision of what I expected to see and what I saw.

The men were beside me and had not lifted their heads or glanced left or right. I could have touched the nearest set of feet. They were between us! I was sure they were going to see us and we would look foolish. Just then the world seemed to mist and they disappeared!!! 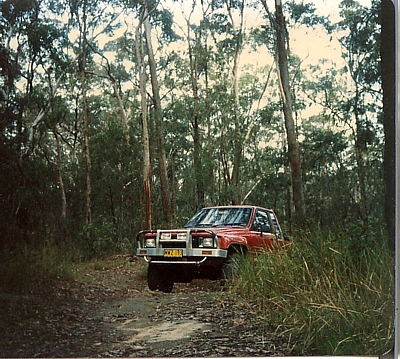 We were alone in the empty clearing with no sound but the shrilling of cicadas.

Our two companions appeared after no more than a few seconds. They had not been close enough to see anything. They had only ever seen the glow and heard the noises. They had felt confident they would emerge into a clearing containing strangers and our combined disbelief was such that we all shrugged our shoulders and looked embarrassed. Nobody said much after the first greetings. I thought I had blurted out a question but nobody looked my way so perhaps I hadn't.

I suspect for a moment Al thought he was the butt of a joke. At some point I tried to tell him they had just disappeared but he got angry and told me to shut up. I remember thinking we would talk later. Both Al and I had flash tempers in those days and when one demanded space the other respected the request.

Although twenty years later, and younger forest than we experienced, this is the type of bush found in the area
Our companions were totally silent for the trip back to the cave and if my memory is correct they left us with barely a nod as soon as we arrived. It didn't seem odd that nobody said much although I was busting to talk about it

Did we stay the night? I don't know. I seem to remember struggling to get my sleeping bag into a comfy position on a sloping cave floor but we slept there often and in many places like it. It was over thirty years ago!

about The Castle Hill rebellion

It was dark by the time Alan and I set camp in one of the caves overlooking the thickly forested gully. On the ledge in front of the cave we had lit a small fire .

Lamb-chops we had filched from my mother's fridge.were hanging on twigs and being alternately smoked and seared by the flames as the breeze changed direction.

Earlier we had met two people exploring the forest and they had joined us at the campsite. It had become a warm moonless night by the time we settled to enjoy the fire and swap stories.

The caves are high on the edge of the valley so we could see across and down into it for some distance.

We heard the sound of equipment rattling and the scuffling sound of walkers in the distance. Peering down through the trees we saw a light bobbing along the trail on the far side of the creek

The glow was drawing closer and, sensing an adventure, we decided to go hunting and see who was walking about at night. The possibility of someone planning to camp in the area had us delighted. We had visions of their amazement when we visited them out of the darkness.

Al went with one of our new friends. The pair dropped down via a steep erosion gully and moved around to get behind the moving light. The remaining explorer and I went a short way from the cave to discover if the lights would follow the path toward us. We expected them to change course toward  the reserve or continue on another trail leading along the creek to areas better suited to camping.

Unable to make out landmarks we were still able to tell when the glow moved past the reserve trail onto the crossing by the Loch and toward us. We had moved from our rocky perch down onto the sandy clearing and were likely to be caught in the open if they continued.

We went to the far side of the clearing and dropped into two shallow, parallel depressions in the sand. We were about thirty feet (or less) from the trail to the camp and hidden in long grass.

( I have come to the conclusion the depressions were unusual and the whole scene may have rotated around them. They may have been the graves of the prisoners!)

They did not go past but entered the clearing and turned toward us. This was a surprise. The clearing ended by our feet and there was only a boulder-strewn slope with heavy scrub.